When Steve Kjergaard accepted the position as director at Sloulin Field International Airport (ISN) six years ago, he thought it would be a static, solid three-year experience without much fanfare. Boy was he wrong. Shortly after he arrived at the North Dakota facility, an oil boom struck and flooded the area with geologists, oil field workers and contractors. Hotel rooms and rental cars became scarce, and traffic at ISN ballooned.

"One of my first meetings was with the mayor and commissioner of the city to talk about moving the airport," Kjergaard remembers.

Soon, plans were underway to build a new, larger facility: Williston Basin International Airport (XWA), about five miles northwest of ISN. Construction for the $265 million project began in October 2016; completion is expected in late 2018 or early 2019.

In conjunction with construction of the new airport, ISN also built and launched a website (xwaproject.com) to provide updates about the project, answer frequently asked questions and offer a portal for vendors to review the bidding process.

"The state has done a few project websites, and it seemed to be beneficial to both the staff and the public," explains Kjergaard. "When you can tell the public that there is a website with all of the answers they need, they have a better response to the project itself."

The airport contracted DAWA Solutions Group to build the website's framework for $10,000, and the ISN team filled it in with content. (DAWA has been the city's vendor of choice for years, providing multiple websites for various aspects of local government, parks and recreation, and the chamber of commerce.) Because the new airport website is  built on a content management platform, airport and city staff can modify its content at any time-which saves time and money.

In September, the website was attracting 600 visitors and more than 1,000 pageviews per week.

Another Airport?
One of the website's primary purposes is to explain why a new airport is needed.

Because ISN is located in the center of the Bakken Shale Formation (the largest continuous oil reserve ever assessed by the U.S. Geological Survey), its infrastructure and resources were stretched paper thin when the area's most recent oil boom was in full swing. Between 2011 and 2014, airline enplanements quadrupled from almost 28,000 to 119,000.

To cope with the rapidly expanding traffic, ISN purchased a doublewide classroom trailer and placed it on the ramp as a temporary holdroom. At the same time, airport officials started assessing longer-term options.

• terminal building is too small for current and future passenger traffic
• room for just one TSA lane
• limited bathroom facilities (two small bathrooms on the secure side; one two-stall bathroom before the security checkpoint)
• undersized baggage claim (about 10 to 12 square feet)
• not enough primary parking

The terminal's various shortcomings make it difficult to accommodate 50-seat jets, says Wanner. "From a service standpoint, accessibility in and out of that terminal is important," he adds.

Although the oil boom has slowed, traffic at ISN is still well above its historic averages.

"The numbers have come down a bit, but it's still significantly higher than in the past," he notes.

The website for the new airport details airside deficiencies at the existing airport. For example, ISN's airfield does not meet FAA design standards for many aircraft currently using it-primarily Delta and United airliners, but also large

corporate jets. The slope of the existing runway is too steep (and would require extensive work to correct); the taxiway is too close to the runway; and the pavement strength is not designed for current and projected use.

Wanner adds that ISN's runway protection zone has buildings and active roadways within it, and landfill and wetlands within five miles pose potential wildlife issues.

Given all the airside and landside issues, it made more sense to build a new airport (XWA) than to renovate the existing one (ISN), he summarizes.

Truth & Transparency
Brent Bogar, community and contract liaison for the new airport project, considers the XWA website a key communication tool. After serving as Williston's airport commissioner from 2007 to 2013 and helping launch the new airport initiative, Bogar relocated but has continued to work on the project as a consultant for the city.

"I think with a project of this magnitude, having a central place to communicate and share information is critical, and the site gives us that opportunity," says Bogar, now chief executive of Jadestone Consulting. "There is a lot of downtime

when the public doesn't see action happening, but they can go to the site and see that it's in design phase, or we're waiting on some assessment, etc.  Having the site answers a lot of questions even when it seems progress isn't being made."

Wanner agrees, noting that the website helps keep community members up to date. "Truth and transparency are very important," he emphasizes. "We wanted to make sure that the public could get facts and not rumors. When they don't have the information they need, they can get information directly from the site.

"When you build a new airport, there are a lot of steps," he continues. "People can see exactly where we are in the process, which saves us time in being able to effectively communicate the message. The site also shows that the project is happening; it's real. When you have a site, it offers that assurance that we are moving forward."

As community liaison, Bogar tracks online reactions. So far, public response has been very positive, he reports. Posting a link to the website on Facebook proved particularly helpful.

"People were starving for a place to have their questions answered," he explains. "I was pleasantly surprised about the traffic we received when it opened and continue to receive. For a project this size, the traffic has been very consistent. When there is new information, that traffic peaks."

Kjergaard credits the website for helping engender support for the new airport-and even converting the few community members who initially opposed the project. Information posted on the website explained why the new airport was needed and helped change their minds, he explains.

"Once you give people visual information, it seems to help them understand," observes Kjergaard. "We thought it was a great access point for people to learn." 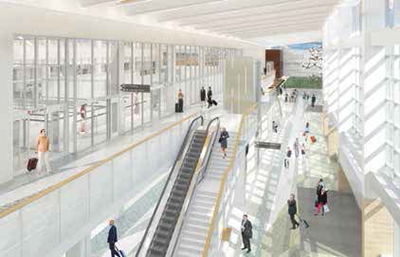 In retrospect, Bogar says that posting even more details up front would have been helpful. If he could do it all again, he would flesh out as much content as possible before launching the site. Offering community members more opportunities to learn about the website, via social media or public outreach events, would also have been helpful, he adds. For airports considering similar efforts, Bogar suggests holding an open house to gather initial feedback about usability and desired content.

"We met a lot of those needs since we launched the site, but we could have done that up front and fleshed out FAQs [frequently asked questions] more quickly," he reflects. "We did reach out and talked to various people in the city and private citizens involved with the airport, like pilots and FBO staff, and that was a good start."

In 2019, the project website will be replaced with a new site to herald the arrival of XWA. In the meantime, Kjergaard says the current site has made his job a lot easier.

"Before the site was live, we'd get a call once a week about 'How can I bid on this' or 'What's going on with this?' (Now,) if the public has questions about anything, they can go directly to the FAQ section."

As the new airport continues to evolve, so will its website. Next, the team plans to add more pictures and live web cams that will broadcast video from the construction site. "We want to keep people informed as much as possible," says Kjergaard, noting that he wants everyone to feel the progress.

"This is a once-in-a-lifetime project for a community," he says. "We have to build a facility for the future, not just for today. You never know how big to build, but you want to build big enough so you don't have to build again. This site allows the Williston area to build the future with us."